The past week has given women plenty of reasons to be angry. So have the last year and decade, for that matter. Over on Twitter, we asked the question: What are your favorite films about female rage? And today, we are here to answer with our own.

I’m surprised none of the other Dames thought to list one of the landmark movies about angry women. Thelma & Louise isn’t necessarily a revenge flick – men totally perceive it that way – but instead is a story about women’s exasperation with rape culture (and considering this was released in ’91, that’s amazing.) Susan Sarandon’s character is traumatized by something in her past that comes out when she sees her best friend almost assaulted. This is a movie about women sick of men treating them like sex objects and decide to give them a little something back! And I know everyone cites Brad Pitt as being the best man in the movie, but I do love how this movie characterizes the relationship between Sarandon’s Louise and Michael Madsen’s Jimmy. Before we got the Ginsbergs in On the Basis of Sex, this was relationship goals.

There’s certainly plenty to criticize when it comes to this movie, but I always considered it to be more an examination of stupid men and their desire to control women. Alicia Vikander’s robotic Ava uses the stereotypes men place on women, whether that be the damsel in distress or the weird desire to bang a robot, and uses that to play dumb Domnhall Gleeson. When she leaves him trapped in the house at the end, it’s a screw you to all men, even the nice ones who want to “save” you.

Again, the criticisms against this movie are understandable, but I always interpreted Linda Hamilton’s Sarah Connor in this film as a woman angry with how society has failed her. She successfully saved the world and she’s been deemed crazy, institutionalized, and her son removed from her care. Even when she does get the chance to break out, she’s penalized for not being a good mother. Her big dream sequence shows that she’s so determined to save humanity, yet people constantly undermine her. She saves the freaking world again at the end of this movie and how is she repaid? By getting killed off in the sequel. Justice for Sarah Connor!

This is definitely a movie anyone who survived high school will see as ragey. As a teen girl already marginalized in school there was nothing more satisfying than watching this quartet of ladies get a hefty boost of power while destroying the bullies that hurt them.

I’ve written a ton about this Sofia Coppola gem so I won’t rehash it here. Suffice it to say her remake of the 1971 Clint Eastwood film is all about women attempting to indulge their lust safely, only to realize that male dominance will always assert itself.

I do love a good tale of women processing their anger, whether in healthy or unhealthy ways. There is a long list of films that do this well, and it was hard to narrow it to five I really love. This is also a good time to shout out Jennifer Kent’s upcoming film, The Nightingale, which is about as female-rage-revenge as a film can possibly get.

It makes me made that this movie is still so relevant almost 40 years later. What is so great about 9 to 5 is the way it takes a story about a sexist pig of a boss and deals with his harassing, misogynistic ways with humor and heart. The bond between Judy, Violet, and Doralee is natural and inspiring. It’s impossible to watch this movie and not root for them to just shoot the bastard!

Ivana Trump told us, “Don’t get mad, get everything!” If only she had actually gotten everything. Things could have turned out so differently. Nevertheless, this story of three jilted ex-wives taking revenge on their scoundrel ex-husbands is perfect for so many reasons. Another great story with a trio of ladies that are fun, funny, and fierce. 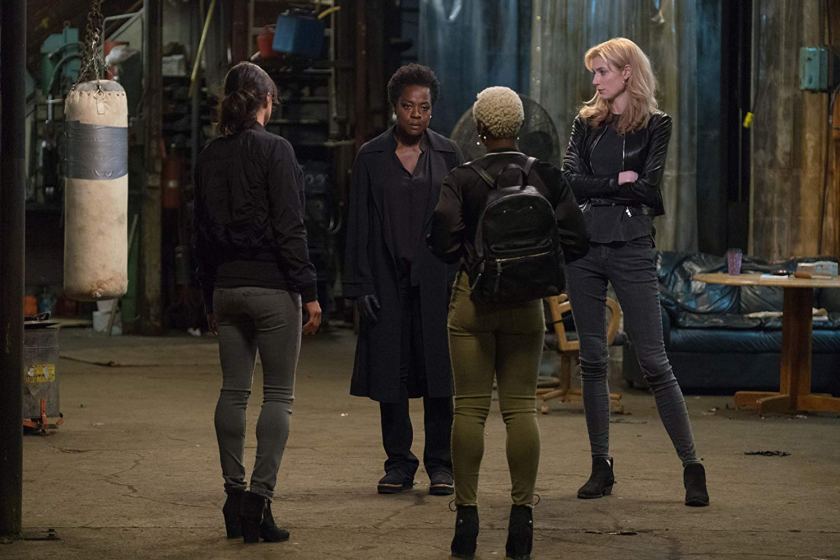 Is there anything more cathartic and heartbreaking and fierce than Viola Davis’ primal scream in Widows? In one moment she manages to express the entire range of emotion from fear to vengeance and it is something amazing. Blend in her co-stars who all face varying degrees of grief and heartbreak and motivation and this becomes a female rage film for the ages.

This is a movie where a girl takes revenge on a pedophile. Oh, he proclaims his innocence for a long time. But eventually, the truth comes out. Like it always does. What makes this film so great isn’t just the way Ellen Page’s Hayley masterfully terrifies Patrick Wilson’s Jeff. It’s that we are left with so many unanswered questions, and in a way that makes it all the more thrilling. Who is Hayley, really? Is she also a victim or simply a vigilante? Whoever she is, what we do know is that she takes no prisoners in the world of garbage men.

Sofia Coppola’s retelling of the novel is fascinating and, well, beguiling, because it shifts most of the focus to the ladies and not on the man who would use and betray them. His words and actions slowly poison relationships and trust between the women in the house. But they are able to put aside their differences and deal with him in the best way they can, considering there’s a war going on.

Everything about this movie is satisfying, whether the badass grandma bikers, the many different kinds of women breaking free of their oppression through mutual (badass) support of each other, the one “good man” who helps them (but never takes credit for them), or Furiosa, the angriest, baddest bitch of them all. It’s a story about women rising up against all the evils of patriarchy and smashing it to the ground.

This is a Republican’s worst nightmare. A pregnant woman whose unborn child merrily encourages her to go on a murderous rampage, slicing off dicks, cutting men’s throats, murdering corporate bosses who provide inadequate access to childcare, and generally communing with the baby in the womb via a murder spree. Alice Lowe’s fantastic horror film externalizes the experience of motherhood in a truly terrifying (and hilarious) way.

Almodovar is one of the premiere male feminist filmmakers; most of his films deal with the multiplicity of gender and the experience of women in a patriarchal society. I could just as easily have put Women on the Verge of a Nervous Breakdown or All About My Mother on here, but What Have I Done to Deserve This? is one of his lesser known (and my favorite) works. The film is a slow burn as a downtrodden housewife deals with her husband’s viciousness, affairs, and bad behavior. A sudden, surprising, but utterly fantastic about-face makes this one of my favorite films about the consequences of pushing women just a little too far.

Another slow burn and one that has a lot of discomfort and abuse along the way, but is that much more deeply satisfying as a result. The film privileges female pleasure as life affirming, while the men are all steeped in violence and death. Another story about breaking free of patriarchy.

An adolescent girl repressed, manipulated, and abused by a violently patriarchal society takes her own power and future in hand by becoming a servant of Satan? I mean…yeah?