Okay, time for a bit on a new discovery! During my plague a few months ago, I fell head-first into a new binge. Shetland. The pony, you ask? No! The dark and brooding Scottish (yup!) police procedural. So, it’s a little tricky in the streaming world. You start on Netflix and then drift over to Britbox for the final season. You’ve got to do those things when you’re a citizen of the world, you know!

Anyway, Shetland follows the dark and brooding adventures of DI Jimmy Perez (Douglas Henshall) as he solves crimes with the aid of the adorable Sandy (Steven Robertson… the subject of today’s write-up) and “Tosh” (Alison O’Donnell)… she drinks dutch chocolate vodka for breakfast, and is living her best life as the series begins.

Look at that scenery!!! Well… technically the landscapes… but, this column is about my frivolous loves and uncontrollable hormones, so you get where this is going (and there will be more coming on the adorable Mr. Henshall soon!).

The adorably blue-eyed and Scottish accented Robertson won me over immmmmmmeeeeeadiately in season one. Clips on this side of “the pond” are relatively scarce…. booooo…. so, I’ve coyly dropped the first season trailer below. While Douglas Henshall’s main character carries much of the weight, you can see Steven Robertson pop up at the 15 second mark (‘She’s been shot!’). The series are short (six episodes) and the stories are interesting. Fans of shows like Wallander should definitely check out Shetland.

My one (mild) complaint about Shetland is that Sandy doesn’t always have a lot to do. I mean, it is Jimmy’s stuff. There have been plenty of instances where I find myself going, “This is all great, but what is Sandy up to?”. His likability completely sells the material and you just want to hug him! No where as much as when he discovers his grandmother murdered in the opening episode.

Robertson’s name is one which is very much on the uptick, despite having worked steadily since 2005. A quick jaunt down his filmography (I’m currently going “Full Robertson”) will show small roles in some relatively well-known period pieces like Kingdom of Heaven, Joyeux Noel and Elizabeth: The Golden Age.

He’s also a staple on British televison, appearing in everything from Ripper Street to Luther and even Doctor Who.

Audiences stateside might recognize him from roles which have started to pop up with increasing frequency (after Shetland). He appeared in a recurring role in the U.K. (original!) Being Human. Now, truth be told, I’ve only started my binge and will admit to starting the series with his late series four debut. So, I’m not well versed to how this is going to go. However, I will say that the costume team deserve a medal… nay… a lifetime achievement award for the suit he wears, which must be one of the most beautiful things to grace television screens. This character is the very definition of suit porn… 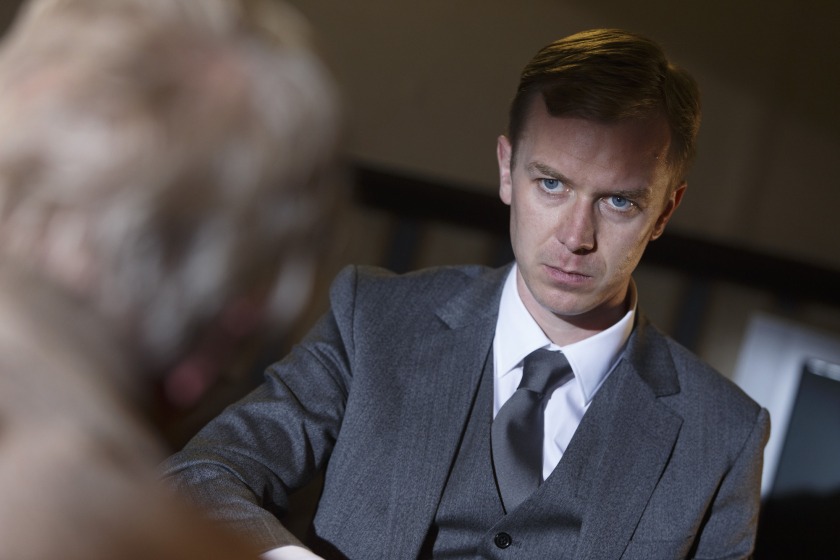 During his Shetland lay offs, Robertson has also found work on Harlots. Viewers stateside can check out the three series, period drama on Hulu. Now, since this crush is very, very early on yet, I can’t say much. I’ve watched the first three episodes and have seen Steven’s character twice for a grand total of two lines and about thirty seconds of screen time. However, it was in both instances for an alley based sex scene… so, do with that what you will.

However, based on writings I’m seeing, his character does get more to do as episodes pass. So, I’m going stick it out and I have two series left to watch (and the sheer delightful ness of Jessica Brown Findlay!).

So the tone of so many of my previous pieces continues with this one. Why, oh, why can’t I have more of Steven Robertson on my television and movie screens? I come for the adorable accent and the beautiful blue eyes, but I stay for the fabtabulous acting.

Stay tuned for more as I continue going “Full Robertson”.