French director/comedian Jacques Tati is often mentioned in the same breath as Chaplin and Keaton, though he occupies, for the most part, a different period of history. Tati’s work spans the 1950s to the 1970s, substantially later than Chaplin and Keaton’s work, but he’s operating from much the same perspective—his Monsieur Hulot is a silent clown, tripping, swinging, and even gliding across the modern world with a charming befuddlement that masks a very real intelligence. But he’s neither as extreme in his physical comedy as Chaplin, nor as acrobatic as Keaton, and his films build slowly to a peak that is as charming and hilarious as it is deceptive, as he turns apparently normal aspects of mechanical and social change to create a circus of technology and humanity. 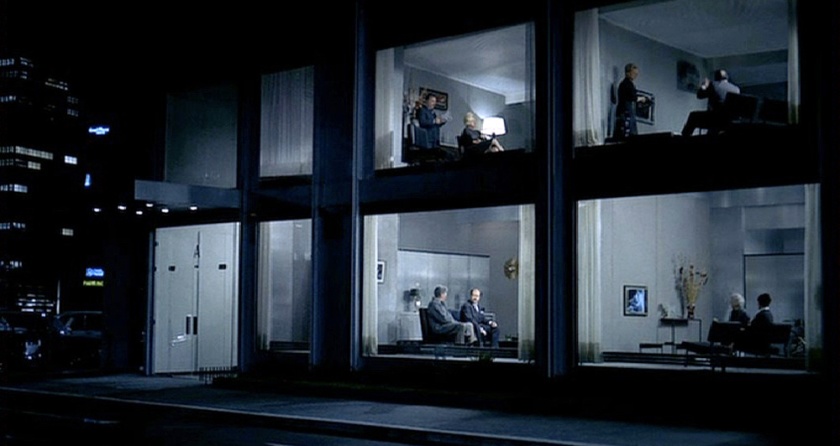 Tati’s greatest work is Playtime (1967), which is currently streaming via Kanopy as part of the Criterion Collection. Unlike his first two Hulot films – M. Hulot’s Holiday and Mon Oncle – here Hulot is more of a secondary character, as the camera wanders through a modernized, mechanized Paris. The comedy here really isn’t through Hulot but through modern life, the sights and sounds, the bureaucracy, the commercialism, the technology run amok. The film follows a loose plot from two different sides—first, the attempt by M. Hulot to have a meeting with a member of a company, leading him into an insane office building, a trade fair, a local café, a friend’s apartment, and a high-end restaurant; second, the perambulations of a group of American tourists through Paris, focusing partially on Barbara (Barbara Dennek), whose life begins to intersect with Hulot’s.

But the use of these characters is really a way to guide the viewer through the world that Tati constructs, a world of automation, of streetlights and street noises, of malfunctioning cars, shattering doors, noisy seat covers, strange vacuum cleaners, pristine floors, and see-through apartments. The comedy builds slowly, each frame filled with gags both of sight and sound, to such a degree that you can rewatch Playtime again and again and still find more that you’ve missed. The most fantastic set piece is a nearly silent sequence that occupies the second half of the film, as a high-class restaurant deals with increasing problems during its first night. Seat backs leave imprints on clothes, floor tiles rip up, waiters get drunk, patrons burst into song, and it all builds so slowly, so meticulously, and so brilliantly that you’ll be sad when it’s over.

Playtime is a work of art that almost bankrupted Tati, but what he achieves is quite amazing in its scope. It pulses with humor and warmth and a deep-seated love of humanity. It doesn’t look at modernity or technology as bad or evil, but rather constructs it as part of the great human tapestry, turning roundabouts into carousels, streetlights into abstract art, airports into comedy showcases. At the base of all of Tati’s films is the belief that underneath the traditionalism of the countryside and the strange modernity of the town are still the same human connections and friendships. Modernity and technology are funny, but so are street sweepers, and tourists, and tall men with umbrellas. And they are all simply another permutation of humanity.

Playtime is available to stream via Kanopy and to rent on Amazon Prime.