On this week’s Feminist Friday, our examination of Jean Harlow’s filmography jumps to the 1932 gem, Red Dust. The romantic dramedy is an exotic Pre-Code spotlighting Gable and Harlow (both soon to be silver screen legends) on the cusp of their exploding popularity. The movie proves to be a fascinating study in not only star persona, but also in Pre-Code Hollywood. This phase would be short lived however, with the introduction of The Production Code drastically changing the face of cinema only a few years later.

Red Dust follows the action in and around a rubber plantation owned by Dennis Carson (Clark Gable). The operations of the company are interrupted by the arrival of a young prostitute named Valentine (Jean Harlow). The tension grows when a wealthy new employee (Gene Raymond) falls ill just after he arrives, with only his new wife (Mary Astor) there to care for him. How will this diverse crowd live together in such close quarters. The film is directed by Victor Fleming from a script by John Lee Mahin.

The narrative features the perfect amount of characters while also squeezing an appropriate amount of storyline into the less than 90 minute run time. Everything feels smooth, the character arcs make sense and nothing is rushed. As years passed, Harlow’s films grew much larger and far more complicated, leaving the stories struggling under the weight of their massive budgets.

Star persona is a fascinating thing. Clark Gable, and particularly Pre-Code Gable, is a study in this. Let’s draw a comparison between a Pre-Code Gable in Red Dust (1932) and a equally Pre-Code Franchot Tone in one of Harlow’s later films The Girl from Missouri (1934). In both films, the men treat Harlow’s character in much the same way: rough and borderline abusive. However, it doesn’t feel the same. Interestingly, it actually feels somewhat less offensive coming from Gable, almost more acceptable. The same treatment coming from Tone’s character feels more hostile and threatening. While this behavior (especially in the build-up to a romantic pairing) is most definitely problematic, it is fascinating to watch how Gable’s star persona plays, especially in comparison to Harlow’s other male co-stars. What is it about Gable’s star persona which makes us forgive him for this behaviour?

Meanwhile, the Gable/Harlow combination on screen is refreshing. It would have been very easy for the film to fall into a stereotypical good girl/bad girl narrative, placing Valentine and Barbara into direct competition with each other. Rather, in constructing the narrative as it eventually concludes, the film puts our leads (Gable and Harlow) on more equal footing. Harlow is not shown as a “fallen woman”. We see her standing on her own two feet, perfectly able to match pace with the leading man. There is a throw-away line late in the film explaining the pairing,

Ultimately, these two are supposed to end up together and the narrative knows this. They are the couple we’re supposed to be rooting for. The narrative embraces its characters, rather than choosing the “acceptable” sexuality over the more complicated as often occurred during the coming years.

Barbara (Astor) and Gary (a very young Gene Raymond) are our other couple. The newly weds are young, preppy and deeply in love. That is, until a Pre-Code Clark Gable enters the picture… he’s catnip for women. Suddenly, our “good” girl isn’t so good anymore. While her husband laid up with a serious fever, Barbara does everything she can to get with Dennis. Just a few short years later, the narrative would have punished Barbara for her behavior with either Gary’s death, or her own. However, the Pre-Code landscape does this film proud, allowing things to wrap up relatively happily. 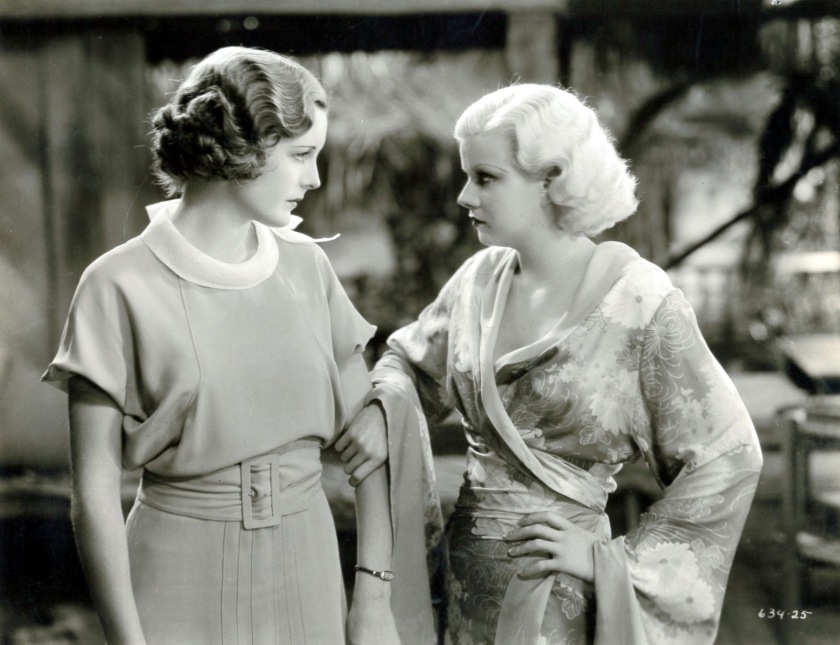 The narrative is aware of Barbara as the “good” girl and Valentine as the “bad” girl. In fact, it is Dennis who repeatedly drills in that these women aren’t the same. We hear him threaten Valentine to stay away from Barbara. He doesn’t want to see “her sort” threaten the newlywed’s delicate sensibilities.

Most problematic in this film is the treatment of race. The movie likely takes place in southeast Asia (Saigon is mentioned repeatedly in the narrative). The depictions of Asians in the story are largely in-line with other contemporary films of this era. While the story actually makes use of Asian actors (as opposed to the “yellow” face- popular in other movies of the period) , the depictions are typical. Actor Willie Fung is the only credited actor in one of these roles (playing Dennis’ house-man “Hoy”). His role is one of comedic relief, played for its over-the-top nature. Think of Prissy (Butterfly McQueen) in Gone with the Wind. There’s no question as to how problematic these takes are; however, this film stands as no-better and no-worse than the work being made in Hollywood during this period.

Willie Fung was reportedly born in China. The actor worked extensively, wracking up 138 credits between 1922 and 1938. He is billed in some classic films, ranging from this movie to The Gay Falcon (1941) and The Black Swan (1942). Unfortunately, it is always in character roles. He’s often billed as “Chinese Man”, “Cook” or “Farmer”. Fung passed away in 1945 at the age of 49.

Red Dust is an early entry into Jean Harlow’s filmography and it’s no wonder that her career exploded after this role. The film features her amazing chemistry with Clark Gable, showing two actors on a meteoric rise. While the film features some definite problematic elements, it also avoids a number of issues common of early cinema. This film is a must see for classic film fans.