She has the smile of an angel (Fights like the devil)

The eyes of an angel (Bites like the devil)

The face of an angel (I say she’s the devil)

She’s mean and evil through and through

Cat Ballou has an unconventional opening. We open on an old west city street in the 1890s. The primary focus is the “Shouters” (Nat King Cole and Stubby Kaye), serving as a unique chorus. They play their instruments and sing the very “old timey” title song, immediately setting the scene. This immediately shows just how unique this film is. Cat Ballou is very different from the westerns coming before it. In its narrative treatment, particularly in the interesting treatment of gender, Hollywood shows itself on the cusp of an era. While the influence of classic Hollywood is still very much there, things in the industry were changing. A new era sat just on the horizon.

Cat Ballou follows Catherine Ballou (Jane Fonda) a schoolteacher recently returned to her home town of Wolf City Wyoming. While she’s home, Cat learns her Father (John Marley) is embroiled in a land battle. Local contractors are pressuring Frankie to sell his land. The stubborn old man refuses, and as a result is shot outside his house by Tim Strawn (Lee Marvin). As a result of her grief, the distraught Cat seeks out to avenge Frankie Ballou. With nowhere else to go, she builds a rag-tag team of old west characters to help in her quest. There’s the drunken gunfighter Kid Shelleen (also Lee Marvin), charismatic outlaw Clay Boone (Michael Callan), Boone’s uncle Jed (Dwayne Hickman) and her father’s former ranch hand, Jackson Two-Bears (Tom Nardini) making up the outlaw gang. 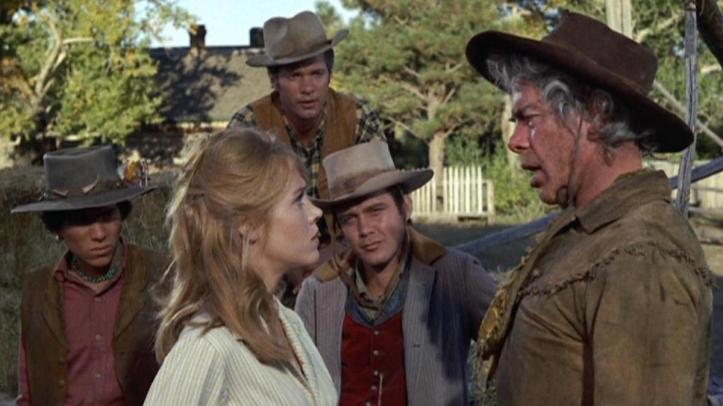 Westerns featuring a woman in an active lead role are seemingly rare up until this point. There are a few films which stand against the norm: Johnny Guitar and The Furies come to mind, as well as musicals like Annie Get Your Gun and Calamity Jane. Men largely dominate the genre. In its self-reflexive opening, Catherine begins as a meek and timid schoolteacher. This is a standard role for women in westerns. However, the death of her father starts her on a drastic transformation as she starts on her revenge narrative to bring down Sir. Harry Percival (Reginald Denny). While the film is a Bechdel Test fail, it is purely due to the lack of other female characters in the film. Cat is a woman in a man’s world, and ultimately she thrives that way.

There is a surprising lack of sexualization of Cat within the narrative. At the beginning of the film, Catherine is a stereotypically chaste schoolteacher. As she evolves into the outlaw gang leader, she dresses largely like the boys. There are only a handful of times after her father’s death where she is seen in a dress. The most notable is as she finally tracks down Sir Percival, and uses her sexuality to get close to him. She plays up a sense of sensual vulnerability to get close to her target. Her gender doesn’t make her weak. On the contrary, her power over her sexuality is a tool. The second time occurs in a fairly mundane scene while Cat is in prison. There is a thin romantic plot line with Clay, but the promise of sex is largely absent. The  two remain seemingly chaste, the focus remaining first and foremost on Cat’s revenge quest.

The most apparent sexualization of Cat occurs outside the narrative, and in the film’s advertising. The posters often show star Fonda bent over and standing spread-eagled in a very suggestive manner. In some of the artwork, she wears a particularly low-cut dress she never wears in the film. In some of the advertising, she holds her gun in an overtly sexual position. Coming in 1965, Cat Ballou was a few years before Fonda’s star making (and sexually charged) roles in films like Barbarella and Klute. The film’s marketing likely isn’t capitalizing on Fonda’s star persona as at the time, she was still very much an up and comer. Her most popular roles were yet to come.

The film features some stellar performances by not only the supremely talented (Queen!) Jane Fonda, but also the diverse and equally talented group of character actors backing her up. As was stated earlier, Marvin won an Oscar for his against type, comedic turn as Shelleen. Dwayne Hickman also shines in his supporting role as Jed. Hickman is best known for his 4 year run in The Many Loves of Dobie Gillis.

As with a number other films of this period, Cat Ballou reverses itself in the end. Ultimately, everything is still product of its time in history. The story concludes with Cat about to hang for her crimes. She stands on the platform with the noose around her neck, but at the very last-minute, her gang orchestrates her escape. As they swoop in to save the day, Cat drops into the waiting funeral wagon, and she and Clay ride off into the sunset. As they kiss and recline on the white satin of the funeral wagon, it’s reminiscent of a couple riding off after their wedding. The wagon might as well have tin cans dangling from the back of it.

Cat Ballou is a unique, comedic western which came out of the mid-1960s. The film, which spotlights the female leader of a gang of old west outlaws, is rare in the classic Hollywood era. The movie, despite some minor problems, is incredibly fun, and gives a hint to the more progressive, revisionist westerns which became more popular into the late 1960s and 1970s.