No, Disobedience is not “that Jewish lesbian movie.” Nor is it the film where Rachel Weisz and Rachel McAdams make out. Yes, the characters they portray are Jewish, yes they are lesbians, and yes there is a sex scene. Disobedience is not a puerile male fantasy in which two attractive actresses kiss; in fact, it avoids any sense of the male gaze, and presents a story breathtaking in its complexity and tension.

Disobedience opens with the death of Rav Krushchka (Anton Lesser), a powerful rabbi in an Orthodox community in London whose daughter Ronit (Rachel Weisz) left several years before. Ronit returns home for her father’s funeral, arriving uninvited at her friend Dovid’s (Alessandro Nivola) house. Dovid has become a rabbi and is Rav’s potential successor. He also married Esti (Rachel McAdams), his and Ronit’s childhood friend. As tensions mount during the week, memories begin to surface about Ronit and Esti’s love affair and the attraction that still exists between them. 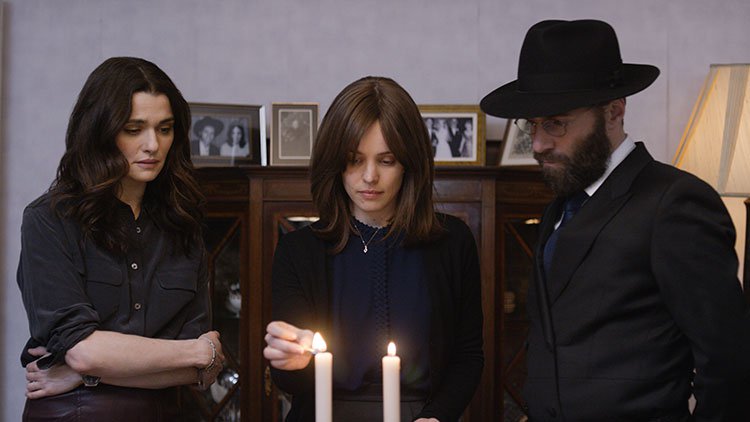 Disobedience has inspired a few comparisons to Carol, which is not that far off. Both films deal with women navigating a conservative, patriarchal society that dismisses their sexuality as at best a disease, and at worst an abomination. One woman has managed to find some degree of freedom, while the other remains immured in the culture, unable to come to terms with her sexuality or her desires. Ronit is presented as freer, in her way, than Esti, but the price of her freedom means that she’s become anathema to her friends and family. Her father essentially denied her existence—in one understated scene, she reads a newspaper obituary that claims he died without children—and her closest friends are now strangers to her. Meanwhile, Esti continues to deny a large part of herself in order to occupy the “correct” space in her community. Their romance, while central to the plot, is as much about them rediscovering lost or repressed parts of themselves as it is about their sexuality. Esti struggles with the idea of removing herself from her community—she likes the work that she does at the school where she teaches English literature, she cares for her husband, she continues to have faith. But she feels she has no choice but to remain in the role that her community requires of her; to admit to her sexuality, even in herself, is to step outside accepted bounds. She would become like Ronit, an outsider, separated from everyone she knows and loves.

The film draws out this tension by depicting—faithfully, as far as I can tell—Orthodox Judaism as practiced in England, including the rules about interaction between men and women, clothing, religious observance, and honor. Orthodoxy is not treated as a solely repressive force; the film admits of no such binaries, instead delving into the complexity of the Orthodox faith through three-dimensional characterizations outside of Ronit and Esti. This is most prevalent in the character of Dovid, who could have easily been turned into a tyrant. But he’s not—he’s a decent, loving man in his own way, and it’s obvious that he loves Esti and cares for Ronit. He’s also limited by his faith and ambition—he is in line to take on Rav’s position, and his wife’s sexuality draws his position in the community into question.

Director Sebastián Lelio’s (A Fantastic Woman) camera exploits the underlying grey areas of faith and love; the color palette emphasizes greyness, in the streets of London, the charcter’s clothing, even the sex scene between Ronit and Esti. But the camera is sensitive in its photographing of the women, avoiding objectification or nudity solely for the sake of titillation. The love scene is explicit without showing naked bodies, utilizing close-ups of the women to bring the viewer into intimate contact with their experience. It is as much about what we don’t see as it is about what we do.

Disobedience makes much of what isn’t said, who is not allowed to touch whom, the things that cannot be expressed between characters within an insular community. There are moments of exceptional beauty in this film, warmth and affection piercing through repression, love interacting with faith, the need to expand beyond the bounds of an orthodox world. The film is ultimately about freedom, about love, and the prices we must sometimes pay for both.

Disobedience is currently at the Tribeca Film Festival. It will go into wide release on April 27.