Welcome to the inaugural entry of our new monthly series, What I Did for Love. Each month one of the Dames will discuss a film of questionable quality that happens to star someone she loves. These reviews can take any form so long as they discuss the feature. First up, Kristen Lopez braves the wilds of 2003 to look at Justin Theroux in Charlie’s Angels: Full Throttle!

In order to look at what doesn’t work about Charlie’s Angels: Full Throttle, you have to look at where things started. Charlie’s Angels was a 1976 television series best known for its big-haired trio of leading ladies who solved capers, while looking fabulous, at the behest of a disembodied male wealthy benefactor. In 2000, in the midst of a wave of actioners that coined the term “high octane,” Hollywood decided to remake Charlie’s Angels, blending elements you saw in shittier adaptations of TV shows. (Each of these Charlie’s Angels films boast elements from the horrific remake of The Mod Squad, another movie I’ve watched for love.)

Now, the first Charlie’s Angels is fun. Yes, it has as many issues as the remake does, but there’s a thin pretense of actually wanting to tell a fun story. The ladies all have solid chemistry, it’s got a Mission: Impossible vibe to it, and Sam Rockwell dances! Three years later and one massive terrorist attack later, a sequel was made, starring the same ladies and directed by the same helmer as the first, that one-monikered hack, McG. 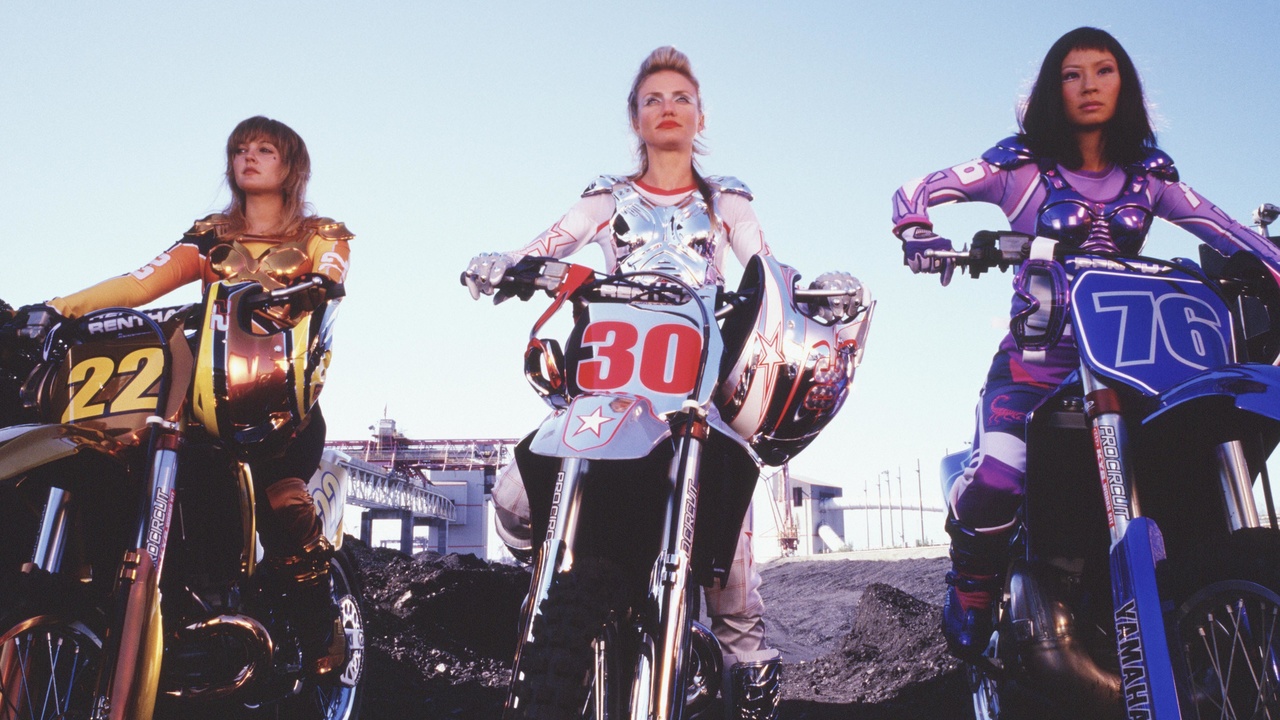 When Charlie’s Angels: Full Throttle came out it was bad. I was only fifteen and not at all as immersed in film as I am now, and even I knew it was shit. I’ve seen it several times since for one reason and one reason only: that fine man known as Justin Theroux. I don’t know what demon he sold his soul to, but I’m assuming starring in this was the price to pay for getting The Leftovers.

I had every intention of doing a diary-esque play-by-play of this movie but my mom wanted to watch it with me – both to make fun of me for watching it and “to reassess” whether it was bad or not. Full disclosure, Mama Lopez had a fun time watching this and I’m not surprised. When I put this forward for the column I noticed many people state they had fond memories of this movie. That’s why I hate to say sorry guys, but Charlie’s Angels: Full Throttle is still shit.

Things go off the rails almost immediately, with a long opening sequence where our heroines, Dylan (Drew Barrymore), Alex (Lucy Liu) and Natalie (Cameron Diaz) have to infiltrate a bar in Mongolian that looks like a cross between a set from The Mummy meets Wandering Oaken’s Trading Post. Everything you loved about the first film, and everything you despised, are on steroids in this movie and can be seen in the opening. So Natalie, who loved to dance in the first, gets a chance to sexily ride a mechanical yak/bull while dressed like a Swedish schoolgirl.

It’s at this point, within the first five minutes, i wasn’t having this. The first film definitely played on making the Angels the object of male fantasy, dressing them as St. Pauli girls, belly dancers, etc. Here, there’s no pretense of actual feminism, as faux as it was to begin with. The girls are actually nude in one scene, there’s an abundance of upskirt shots, and a key section of the narrative involves, yet again, Drew Barrymore’s Dylan being slut-shamed.

So, yeah, let’s briefly discuss the plot. I say briefly because this is a 2-hour movie that has about 10-minutes of plot. Witness Protection files are in danger. Why? Because some moron decided to encode them on rings that look like lugnuts. So the girls have to find the magical rings and get them back into the government’s hands. Honestly, the plot here makes no sense and there’s little interest in actually furthering it. Characters wander around aimlessly, culminating with a big showdown on Hollywood Blvd of all places. I’m sorry, I frequent Hollywood often – including the Roosevelt Hotel where they filmed – and the emphasis on explosions, ESPECIALLY post-9/11 would not have been met with handclaps. Homeland Security would have definitely been called.

Because the plot is so asinine, and is just an excuse to put the Angels in bizarre action situations, you get a lot of time to question things like my statement above. I was left asking, “Why is it funny that Alex’s dad – the loveable John Cleese – believes she’s a prostitute and, for all intents and purposes, ends the movie believing such?” “Why is there 10 solid minutes of ass jokes because Dylan’s real name is Helen Zass? Which episode of The Simpsons did they watch to get that idea? Was Amanda Huginkiss copyrighted?” You start to enter a bizarre spiral of questioning the laws of physics, like how two women can stealthily slide under the rotors of a helicopter, or hang on to the back of a speeding car with only one shot of the camera looking up their skirt. The amount of broken bones I’ve had left me thinking I was just lazy that I couldn’t pop my bones back into place and kick some ass like the Angels. By the end of this movie I felt I should join a gym, buy some Louboutins and totally prep to wear a floor-length fur coat in my underwear.

Was THIS what Lauren was talking about when she watched The Snowman? Holy shit, is Charlie’s Angels: Full Throttle MY Snowman?!

I had to like SOMETHING, right? I did, actually. The Old Hollywood references were way too nuanced for tripe like this but I love that at least one of the three credited screenwriters watched Singin’ in the Rain and felt the need to reference it. I love that someone thought to predict my #MovieCoats love and put Demi Moore in an utterly FLAWLESS fur coat. Hell, I loved Demi Moore in this movie. Sure, her ex-Angel Madison Lee is the villain – her porn star name kinda gave it away – and there’s an overly eager interest in giving the audience some “HOT LESBIAN ACTION” between her and Natalie. But Madison is really the only character who seems to understand how sexist the notion of the series is. Yeah, she’s meant to be the baddie to remind how so notsexist this movie is, but her logic made sense to me. And did I mention the coat? It’s awesome. And because this is the What I Did for Love column I gotta give some time to my boy, Justin Theroux. He plays Seamus O’Grady, an Irish mobster whose so stereotypical I’m surprised “I’m Shipping Up to Boston” doesn’t play every time he pops up. (Strangely enough, the Cape Fear theme plays to mark his arrival and, I’m sorry Justin, but you are NO Robert Mitchum!) His Lucky Charms accent is bad. Really, all I can say is he’s lucky he’s hot. But how dare this movie only give him about 15 minutes of screentime. Unlike the first film, wherein Dylan slept with the bad guy….nope, actually this is the same plotline it’s just Dylan knew this guy was an asshole from jump. I did say he’s lucky he’s hot, right?

The thing I forgot the most though was how shitty CGI still was in 2003. There are moments where it seems like rear projection from the ’60s is being used. One moment where the girls are supposed to be riding dirtbikes looks like the surfing scenes in Gidget. I’m saying there’s no actual action happening. Again, maybe this is an intentional callback to the Old Hollywood thing the film is going for but I can’t give them that much credit.

Holy shit, I wrote 1300 words already on this movie? Okay, that’s 1300 more than it deserves. Charlies Angels: Full Throttle is bad. Bad in a way akin to that other terrible movie starring a man I love that also has a faux feminist message. Yes, I’m talking to you Zach Snyder! (Sucker Punch could SO be a future entry in this column.) As I said when I saw The Last Jedi, how dare this movie waste a perfectly good Justin Theroux. I’m not saying more of him would have made this better, but it sure as hell could have helped! I’ll end with a pun appropriate to this movie: Heaven is DEFINITELY missing an angel because she died watching this movie.